It was six or seven years back when I first decided to walk away from American football. I can still remember the exact reason. I had always been a Jets fan and I remember listening to a game on the radio where they were playing the Broncos. This was during Tim Tebow’s miracle season, the Jets had a the lead, the clock was ticking down, and Tebow was on a roll. I remember refusing to leave the car cheering him on as he posted his sixth (seventh? eighth?) miraculous comeback in a row. It went something like this…

After the game I questioned why I would root for a player I didn’t really like, on a team I didn’t like, over what was supposed to be my favorite team. I haven’t watched a regular season game since that day.

Flash forward to last season and a decent, but not hall of fame caliber, quarterback suddenly starts becoming one of the most talked about players in the game. And he does it for sitting down. (Then, upon reflection and honest discussion, for taking a knee). That got my eye. No matter what you might think about his stance or timing, you have to admit it takes a lot of courage to kneel while the world around you stands. Now Trump has entered the fray in his typically divisive, tactless, yet I would like to believe heartfelt way. Suddenly, half of the NFL seems to be kneeling with him and the conversation has become the newest hot button topic cluttering up my facebook news feed.

Since I am not an expat living in Turkey I have perhaps a different perspective so let me back up and share a bit with you. Every Monday and Friday I stand in respectful silence as students and teachers all around me sing out the Turkish national anthem. Also, every morning I hear this as a call and repeat chant be all the first through fourth graders:

Now forgive my poor translation abilities, but I understand it to mean something along the lines of:

I’m Turkish, I’m truthful, I work hard.
My purpose is to protect the young, to respect my elders,
to love my community and nation more than myself.
My ideal is to advance and more forward.
Oh, great Attaturk!
On the road you have created, I will follow without stopping.
My life is a gift to Turkey.
Happy are the ones who say, “I’m Turkish!” 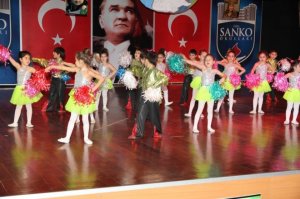 The zeal and regularity with which this chant is foisted on the young can be said to border on brain washing (which in itself isn’t actually a bad thing. God even commands us to wash our brains Romans 12:1-2) The nationalism here in Turkey is much more real and prevalent than it is in the States and around Mustafa Kemal Attaturk, there is most definitely a cult of personality. In fact, it is actually a law in Turkey that “Attaturk’s memory” cannot be “offended”. I know of people who have been jailed and/or fined for breaking it. Honestly, Attaturk did a lot of great things for Turkey, but he certainly wasn’t perfect. Forgive me if I don’t go into details… I wouldn’t want to offend his memory. But if you want feel free to go to wikiedia, I’m sure there’s plenty there for you. (Unless you live in Turkey, in which case wikipedia is blocked for offensive memory type articles) 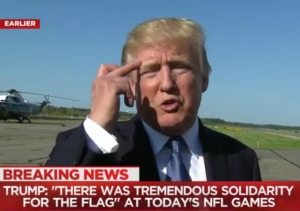 Now back to American football, or rather back to the most recent controversy. What saddens me more than anything is that we aren’t discussing the reasons why an NFL player would feel strongly enough about something to take a knee despite all the pressure and ridicule he has received. Instead we have wrapped our discomfort in rags of patriotism and moved the debate into how he has “dishonored the national anthem”. I didn’t realize how easily so many Americans could take a cue from the Turkish cover up playbook.

I remember writing about a year back how American democracy is so much better than so many others because it doesn’t just accept the rule of the majority but it also gives the minority the freedom to voice their views. (Read it here) Perhaps I was wrong. In trying to shout down these dissenters as unpatriotic, we are moving dangerously close to losing the very thing that makes us so great.

8 thoughts on “Take A Knee”