Running is thirsty work. I needed to make a stop at my bank, and the only way I could possibly get there while they are open was to go on my lunch break. Apparently, bankers hours are the same all over the world: short and inconvenient.

Late last week, I put my bank card into the ATM and it ate it up. I didn’t put my password in wrong… it didn’t even get that far. I just put it in, and then got a message that I should never share my pin with strangers. Wait… what? I had just booked a hotel in a nearby town for the weekend and I guess maybe this counted as suspicious activity?

So I called up my bank to let them know what had just happened. They canceled that card and told me that a replacement would be mailed to my main branch. That branch isn’t anywhere close to my home. It isn’t anywhere close to my work, either. There is no possible way I can leave from work and get there anywhere close to when it would still be open. Bankers hours. My only option to get there on time was to run right from my final class before lunch to the train, ride that a few stops, run a half mile to that bank branch, and then repeat the process on the return journey hoping I won’t be back too late for my next class. 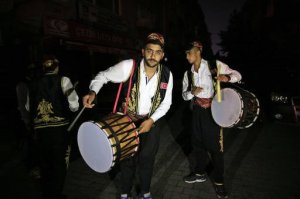 Now let me back up a step. Here in the Muslim world, we are halfway through Ramadan. For someone who is fasting during Ramadan, from the moment the sun rises to the moment it sets, you do not eat or drink anything. Currently, that means breakfast must be eaten by about 4:45 AM and you can’t start dinner until roughly 7:45 PM. Don’t worry if that breakfast time seems early, there will be a guy banging a drum right outside your window at 2 in the morning to make sure you wake up.

Now, as a Christian, I have a bit more freedom with regards to when and how I will fast. Yes, we are still required to do so, but our instructions fall more towards answering the why than the when and how. So I figured, why not fast with my Muslim friends and neighbors, the same way they would, but for much greater reasons? (Isaiah 58) It shouldn’t be that hard, right? You just eat an early breakfast, a late dinner, and then skip lunch. Right? Oh, how naive I can be.

I haven’t been going around, “Hey everybody, I’m fasting!” I have tried to keep it pretty low key. But twice a day I have to escort my first or second graders down to snack time. I also have to be there when they are eating lunch. So it didn’t take long for word to start spreading that the Christian teacher is fasting for Ramadan. This has led towards many opportunities to briefly share my faith as pretty much every teacher in the elementary building has at some point tried to corner me and ask some version of, “You’re a Christian, why are you fasting?” They love it and they are curious.

For me, the food part isn’t all that hard. It is the lack of fluids that is a killer. By about 3/4 of the way through my day, I am desperate for a touch of water. I’m feeling sorry for the rich man begging from hell: “Just one drop on my tongue. Please.”

Now, back to my recent excursion to the bank. Like I said, running is thirsty work. Nobody’s around. Nobody’s looking. I’m not really a Muslim and so I don’t have to do this fast exactly as the others fasting in my school do, right? This was exactly what I was thinking as I rushed from the bank to my train stop. My thought was that if the next train was a few minutes away, then I would buy a bottle of water and down it before queuing up. If it wasn’t, the more common train would be dropping me off about four blocks from school right next to a BIM (think Aldy’s) and I could buy a bottle on that end.

Of course, as luck would have it (or divine intervention) a train was rolling in right as I was arriving and I barely had time to catch it as it was. This train was the less common Adliye line so it would end up dropping me off closer to the school, but on the other side further from that store. So even though I had made my mind up to cheat, God in His mercy worked circumstances so that I could instead maintain my integrity.

“Christians are hypocrites”. That is an accusation that seems to get leveled at us with eye-rolling regularity. How often do we deserve it? How often are we living and acting as a Christian should only when it is convenient or when others are watching, and then dropping those self-imposed values we trumpet the moment they become a touch too difficult or inconvenient?

Somewhere along the line, my fasting turned from a time to pray that the bonds of injustice into something I am only doing to be seen by others. I want to say that the accusation so often leveled against us is unjust, but apparently, the shoe fits. So now I can say like the Sons of Korah, “As for me, my feet had almost slipped.” (Psalms 73:2) How many times has God done that for me? How often for you? God has promised that He would always provide a way for us to escape temptation (1 Corinthians 10:13), I pray that He would also give you and me today the wisdom to recognize that way when it is before us.

One thought on “My Feet Had Almost Slipped”